Tom Burek, 62, our friend, fellow coach and more, — departs after battle with Covid-19 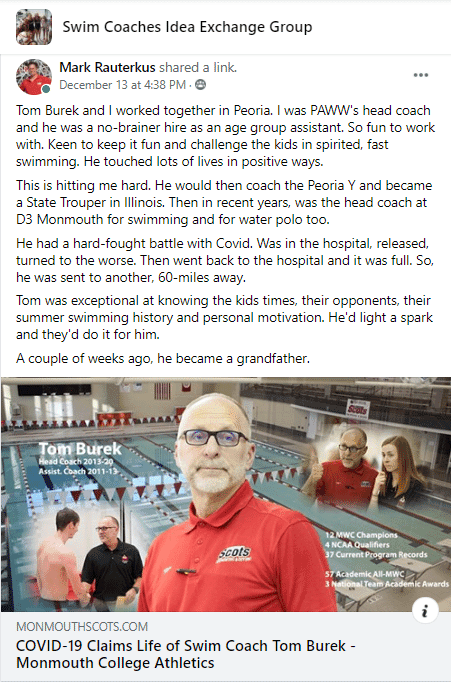 Tom wasn't the first coach to be taken from our aquatic community. Hopefully few or none will follow.

The daily death rate in the US exceeds the the number who passed on 9/11. 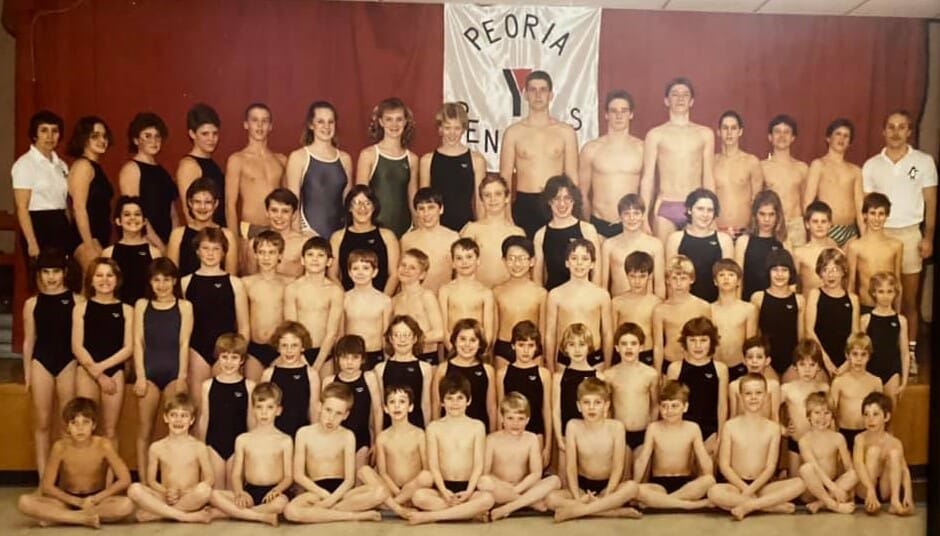 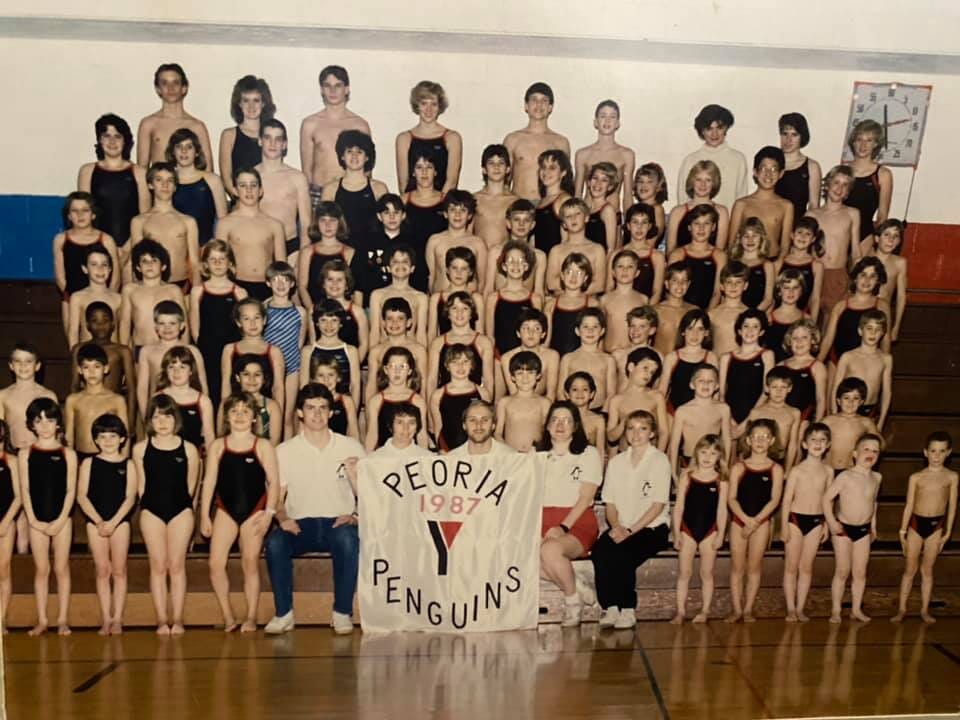 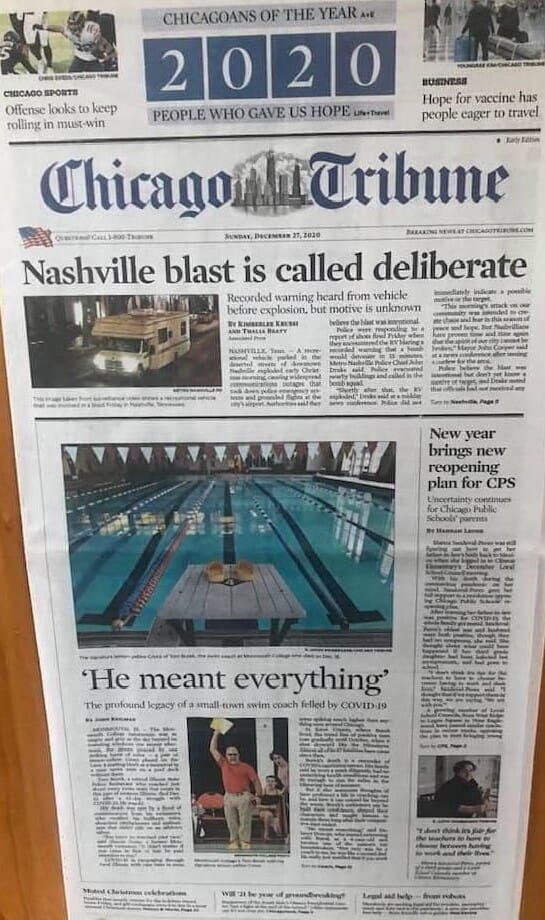 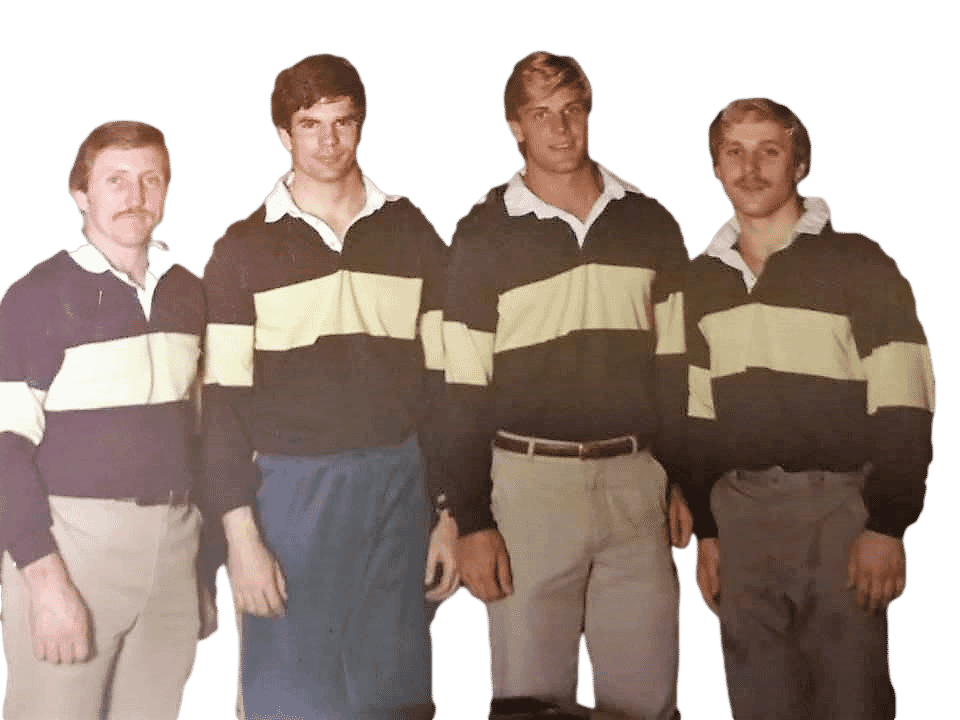 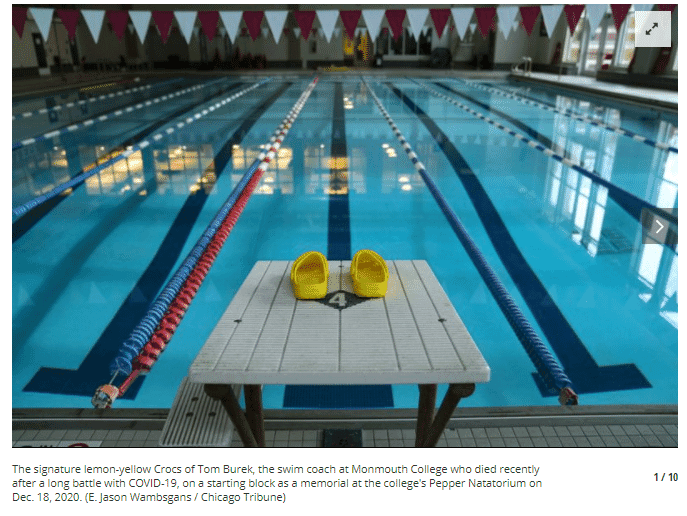 MONMOUTH, ILL. — The Monmouth College natatorium was as empty and gray as the sky beyond its towering windows one recent afternoon, the gloom pierced by one striking burst of color — a pair of lemon-yellow Crocs placed on the Lane 4 starting block as a memorial to a man never seen on a pool deck without them.

Tom Burek, a retired Illinois State Police lieutenant who coached just about every swim team that exists in this part of western Illinois, died Dec. 12 after a 42-day struggle with COVID-19. He was 62.

His death was met by a flood of reminiscences from his swimmers, who recalled his bullhorn voice, abundant catchphrases and enthusiasm that didn’t ride on an athlete’s talent.

“You knew he watched your race,” said Shayne Stone, a former Monmouth swimmer. “It didn’t matter if you came in first or last, he paid attention to you.”

COVID-19 is rampaging through rural Illinois, with case rates in some areas spiking much higher than anything seen around Chicago. In Knox County, where Burek lived, the trend line of positive tests rose gradually until October, when it shot skyward like the Himalayas. Almost all of its 87 fatalities have come since then.

Burek’s death is a reminder of COVID’s capricious nature. His family said he wore a mask diligently, had no underlying health conditions and was fit enough to run for miles in the blistering heat of summer.

But it also summons thoughts of how profound a life in coaching can be, and how it can extend far beyond the arena. Burek’s swimmers say he built their confidence, shaped their characters and taught lessons to sustain them long after their competitive days ended.

“He meant everything,” said Delaney Duncan, who started swimming with Burek as a 6-year-old and became one of the nation’s top breaststrokers. “Not only was he a coach to me, he was like a second dad. He really just instilled that if you work hard, you play hard, you will get somewhere.”

Burek was born in Chicago but didn’t take up swimming until his family moved to Peoria when he was in high school. Something about the sport grabbed him, and upon his graduation from Illinois State University, he began coaching at a YMCA.

A few years later, at the suggestion of a swim parent, he joined the Illinois State Police, eventually rising to the rank of lieutenant. He became the face of the agency during the Drew Peterson investigation, traveling to Chicago to brief reporters about developments in the sensational missing person case.

All the while, he kept coaching, doing stints everywhere from country clubs to Bradley University. He approached the job with a mix of seriousness and whimsy, a stickler for stroke-refining drills who also had his swimmers race each other with donuts clenched in their mouths.

“He was probably the first coach to show me that the sport could be very challenging, but at the same time I could always have fun and be goofy,” said Danielle Tansel, who grew up in Galesburg and became a swim coach herself. “The sport didn’t have to be just one or the other. I think that’s probably the biggest lesson that I took away from him.”

In 2011, just before his retirement from the state police, Burek became an assistant for the men’s and women’s teams at Monmouth College, a small liberal arts school 15 miles east of the Mississippi River. Two years later he was the head coach.

His leadership brought immediate results in the pool: His swimmers won 12 individual Midwest Conference titles and a few qualified for the national championships. Thirty-seven of 40 school records were set during his tenure.

But Burek also encouraged his athletes to hit the books — they brought home 57 academic all-conference awards — and tend to their emotional well-being.

“He wanted to know your parents, your siblings,” said Erin Lafary, who swam for Burek at Monmouth before becoming his assistant. “He wanted to be in tune with you, not just as the athlete in Lane 3 but what you were doing outside of the pool as well. He made it a family-oriented program.”

While Monmouth students were allowed to come to campus in August, the pandemic forced the cancellation of fall sports. Burek continued to hold practice in the hope his swimmers could compete in the winter; they kept their distance in the pool and wore masks for dryland conditioning.

Sometime in October 2020, though, as COVID-19 cases began to soar, Burek and his wife Gaye were infected. The family has no idea where the transmission might have occurred.

At first, Burek endured his fever and shortness of breath at home, but even as his wife recovered, his condition grew worse. He went to a local emergency department and ended up in intensive care.

“(The virus) really just affected his lungs,” said his daughter, Laine Galardini. “His heart was very strong and there was nothing else wrong with him.”

After three weeks, his doctors sent him home with supplemental oxygen. Though he was weak, he sent a note to his swimmers encouraging them to keep training when they returned home for winter break.

“Strength / conditioning are vital,” he wrote. “It is your dedication to yourself and our team that will motivate you to do as much as you can over break. … No one is looking forward to this season more than me. Goggle up!”

Within days, his breathing deteriorated. An ambulance took him to a hospital in Bloomington, where he was placed on a ventilator. Though he showed occasional flickers of improvement, his lungs were too damaged to recover.

“He’s going to be missed by so many people,” Gaye Burek said a few days later. “That’s the hard thing of it. He just had so much more to give.”

A dozen state troopers stood at attention at Immaculate Heart of Mary Church in Galesburg, saluting as Burek’s casket passed between them. Inside, mask-wearing mourners sat far apart as the Rev. Lee Brokaw memorialized the coach’s commitment to his family and athletes.

When the funeral mass ended, four Monmouth swimmers huddled in the cold and shared memories of Burek: how he rekindled their love of a demanding sport; how proud he was when they attacked their goals, even if they came up short; how he helped them cope with anxiety and other challenges.

“He helped me through some of the hardest days,” said Brittany Lira, who wore yellow Crocs with her dark dress as a tribute. “No matter what you were going through, you could walk onto the pool deck and see a smile on his face. You knew he was there to support you no matter what.”

The Midwest Conference recently announced it was canceling winter sports, meaning Monmouth’s swim season is over. But college President Clarence Wyatt said the program will carry on, and some of Burek’s athletes said they will too.

“Every time I get in that pool, it’s going to be for Coach Burek now,” distance swimmer Kaitlyn Fox said. “I think that’s the best way to remember him.”

John Keilman is a general assignment reporter for the Chicago Tribune, based in the suburbs. He writes about sports, education, health, drug abuse and many other subjects. Before joining the Tribune in 2001, he worked as a reporter in Virginia, Maryland and Ohio. Tips about strange occurrences, public outrages and inspiring people always welcome. 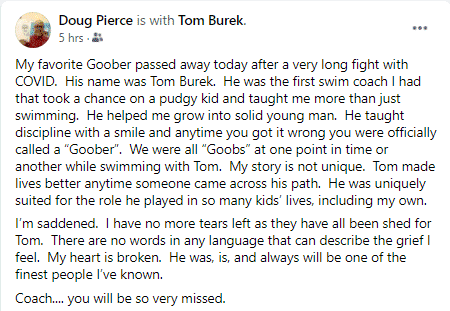