NY Women goes for swim in Maine, off island, wetsuit, and becomes first death ever due to Great White Shark

Not good. The water is so cold, that the sharks avoided Maine. Until now.

Hope this is not a new trend.

A woman who was swimming off the coast of Maine on Monday was killed in the first shark attack fatality in the state’s entire history.

Authorities say that the victim, 63-year-old Julie Dimperio Holowach of New York City, was killed by a Great White Shark while swimming off the shore of Bailey Island with her 20-year-old daughter. Her daughter was uninjured in the attack.

Holowach appeared to be attacked by the shark around 3:20 p.m. Kayakers were able to pull her body to shore where she was, unfortunately, pronounced dead by EMS responders. The U.S. Coast Guard also responded to the attack.

At the time of the attack Holowach was wearing a wet suit and officials speculate that — though it is not clear why the attack actually did occur — the shark might have mistaken Holowach’s dark silhouette for a seal. Several seals in the area have recently been observed with bite marks, and a seal’s body was found washed up on shore in Phippsburg, Maine with a 19-inch bite wound, though experts say that is fairly normal.

The Massachusetts Division of Marine Fisheries was able to determine that a Great White was the type of shark that attacked and killed Holowach by identifying a tooth fragment recovered from Holowach’s body.

Not only was Holowach’d death the first fatal shark attack ever recorded in Maine, it was only the third recorded shark attack at all in the state’s history. The other two occurred in 2010 and 1837, respectively.

According to the International Shark Attack File there were 64 unprovoked shark attacks in the entire world last year, and only two of those were fatal. Shark attacks are down in 2020, which experts believe is due primarily to worldwide quarantining.

Bailey Island off of Maine's coast. 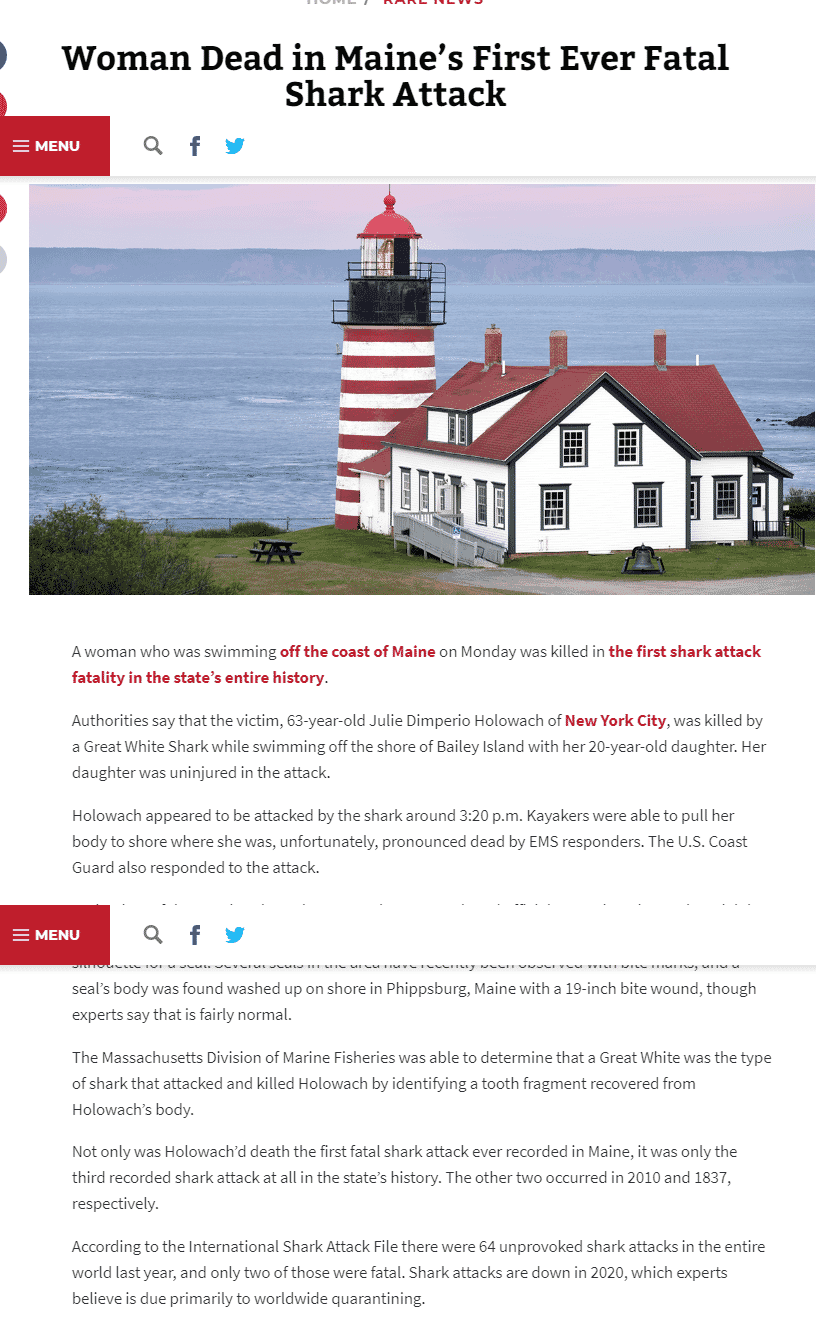 Travel and compete in a meet in Brazil with AAU

Travel and compete in a meet in Brazil with AAU

Word of Mouth –> from Bot to our ears.

Word of Mouth –> from Bot to our ears.

Does this fit for swimming too?

Does this fit for swimming too?

Reservations are filling for spring meets, but there is still room for your team

Reservations are filling for spring meets, but there is still room for your team

Do not let this happen in your state. Administrators changed the fabric of sport without consulting a single coach!

Do not let this happen in your state. Administrators changed the fabric of sport without consulting a single coach!

Time to decorate – Festive ornaments for the New Year

Time to decorate – Festive ornaments for the New Year