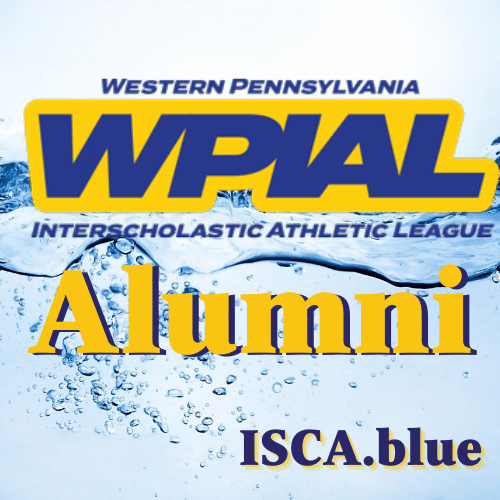 Info on the WPIAL Swimming and Diving Championships has shifted to a new site geared to an Alumni Group. The meet results from 2022 are posted there too. Click the image above or go to https://WPIAL.ISCA.blue.

The 2021 WPIAL Swim page too, with many interviews

Media highlights below in the toggle and also in the comments at the bottom of the page.

If you have media articles, post them in the comments too.

Quaker Valley article in the Post-Gazette

When Isabel Huang stood on the medal stand after Quaker Valley took third place in the 400-yard freestyle relay at the 2021 PIAA Class 2A finals, she thought she would have one more opportunity to win that elusive state title.

As it turned out, that was the last time she would ever swim for the Quakers.

Huang, a senior, has hung up her goggles on her high school career while she recovers from a right shoulder injury. She has not swam competitively all year and, even though she is slowly working her way back into the pool, she does not believe she could compete at the WPIAL finals in early March.

“It was kind of heartbreaking at first not being able to compete for a little bit while I’m recovering,” Huang said. “I felt like I was being left behind by everyone, but I think it was a good time to take a mental and a physical break.”

Huang has swam at a high level throughout her prep career. As a freshman and sophomore, she won both the 200 individual medley and 100 backstroke. Last year she finished second in both events to Mapletown’s Ella Menear, but still won a pair of gold medals in the 200 medley relay and the 400 freestyle relay to help the Quakers finish second to Northgate in the team standings in the WPIAL finals at Upper St. Clair.

Her best individual finish at the PIAA Class 2A meet came last year when she was second in the 200 individual medley with a time of 2:05.60 that was 2.35 seconds behind Lewisburg’s Kimberly Shannon.

“I feel like I’ve left an impact on the younger swimmers and I was happy to let them see where you can get,” Huang said. “I was really happy to show the younger girls what it was like to go to WPIALs and states.”

Though her high school career has ended, that doesn’t mean Huang is done swimming competitively. The No. 23 ranked senior swimmer in the state will take her talents southward in the fall as she has already committed to Emory University

“I talked to the coaches there and I wasn’t able to do an official or unofficial visit there because of COVID,” Huang said. “But I really loved the campus and Atlanta in general, and I was really drawn to it.”

Coverage in the Post-Gazette in Jan 2022

Drew Holmes is trying to shake off a severe case of “senioritis.”

“Sometimes it’s hard to stay focused on the right goal,” Holmes said. “As a captain I need to lead and be more focused, so I have to change my mindset.”

It’s not like the Gateway senior has anything to prove to anyone. He is the defending WPIAL Class 3A champion in the 200 freestyle, is the top returning finisher in the 100 freestyle and has pared his prospective colleges down to three — IUP, Bloomsburg and Old Dominion.

Then again, considering he has to brave the cold and drive through several inches of snow to get to Squirrel Hill to train at the Jewish Community Center, he’s stayed motivated.

“It was crazy. The drive home was not easy,” Holmes said. “But at the end of the season, you look back and you’re thankful for it when you have good times and reach your goals.”

Though most swimmers have locked in their events by their senior year, Holmes has decided to shake things up a bit. Even though he is the defending champion in the 200 freestyle, he is considering a switch to either the 200 individual medley or the 100 breaststroke.

If he decides to swim the 200 individual medley, he will go head-to-head with defending champion Daniel Simoes of Seneca Valley. If he opts for the 100 butterfly, he’ll have Bethel Park senior and 2021 third-place finisher Dom Cortopassi as well as fourth-place finisher Ganesh Sivaramakrishnan of Upper St. Clair in his sights.

“It’s my senior year and I’ve done the 200 free three years and I’d like to switch it up,” Holmes said. “No college is going to change how they view me, so this meet is about having fun.”

Indiana won the 2020 WPIAL Class 2A boys team championship with only seven swimmers on the team.

Considering the Little Indians have 11 this season who could qualify for the finals, there is a good chance the school might make it three titles in four years.

Indiana swimmers have some of the best individual times in the state so far this year regardless of classification. Perhaps the biggest impact, though, has come from one of the youngest members of the squad.

Freshman Preston Kessler has posted times that rank him in the top 10 overall in the 50-yard freestyle and the 100 freestyle. His 21.55 in the 50 freestyle has him ninth overall and his 46.89 100 freestyle is fourth, just 0.24 seconds behind Seneca Valley senior and Cornell recruit David Simoes.

To put his times into perspective, Kessler’s 21.76 in the 50 freestyle would have placed him third in the WPIAL at last year’s finals. He is ahead of the pace that the top 2021 returner this year, third-place finisher Zach Huwalt of South Park, set when he went 21.76.

Kessler’s 46.89 in the 100 freestyle would have had him second in the WPIAL behind Neshannock’s Conner McBeth by 2.02 seconds in the WPIAL finals and third in the state behind McBeth and Jacob Wade of Susquehannock.

Wade, a junior, is the top returner in the event with a 46.55 in the state final. His best time this season, though, is 47.54 which is seventh overall in the state.

“[Kessler’s] new on the high school scene, but he’s not new on the swimming scene,” Brown said. “He’s been swimming with the Indiana YMCA for a really long time and, every single meet we go to, he’s shaking hands with someone on the other team that he knows from the program.”

Even though he has two of the fastest times in the speed events, he’s still waiting to figure out what events he will swim when the WPIAL finals roll around at the beginning of March.

“What we’ve been doing with him is looking at a team and who their top guy is and having him swim that event to see what he can do,” Brown said. “He’s got tons of talent and our biggest problem will be to decide what he wants to swim because I think the sky’s the limit for this kid.”

He’s not the only one.

Indiana returns sophomore Alex Bauer, who finished ninth in both the 200 individual medley and the 500 freestyle last year. The Little Indians also have another freshman, James Nunez, who is posting solid times across the board.

“I’ve got some depth there on the boys side,” Brown said. “It’s really fun and, you don’t like to predict anything, but I know who is coming up from the YMCA program and I think we have some room to grow.”

Kaitlyn Connors took home the title of fastest swimmer in the WPIAL last year when she posted a 23.75 in the 50 freestyle to win her first title in her home pool.

Now, though the Upper St. Clair sophomore has already beaten her 2021 winning time in the 50 freestyle with a 23.72 in a dual meet against North Allegheny, she’s looking to expand her horizons. With that in mind, she’s in the process of deciding what events she will swim in the WPIAL finals.

And an encore performance in the 50 freestyle is not a guarantee.

“I don’t know what I’m swimming at WPIALs, but I know, whatever it is, it’s going to be fun,” Connors said. “I’ve talked to my coaches and I just haven’t really decided what I’m going to swim.”

In addition to the 50 freestyle, Connors swam the 100 freestyle where she finished third behind her sister Taylor, a Miami (Ohio) freshman and North Allegheny junior Lexi Sundgren.

But whether or not she decides to stick with one or pick two new individual events remains to be seen.

“It’s nice because knowing I can always return to the 50 or the 100 or switch over to some longer distances, is really nice,” Connors said. “I’d like to stick with anything freestyle, but I’ll wait until right around WPIALs to see what I’m doing good in.”

With everything in the water up in the air, she’s making sure she’s putting in the work so she excels at whatever she inevitably decides to swim.

“I’m improving in a lot of my times,” Connors said. “I’ve been working on my underwaters and my turns because, last year, I don’t think I did too well with those.”