What happens when a person is trapped in a riptide?

In a rip tide, really a rip current, the swimmer is pulled out to sea. First of all, while in the current, you don’t know it. You might be with a friend and giving attention there, and then you glance to the shore line, perhaps just 20 or 30 yards away about 10-seconds ago, and it is going farther and farther away.

Rip tides are hard to spot and notice when you are in them. And, they are not easy to see when standing on the beach. Rookies to the beach are oblivious. It is good to have some understanding of them as they are dangerous and not well understood.

I am a swim coach and a very good swimmer. However, I’m no match for the pull of a rip tide or the rip current.

Often, when the situation is noticed, the rookie swimmer who is caught in that situation tries to save himself by getting out of the water and heading straight onto the land at the beach. Good goal, but it isn’t smart to go straight against the the power of the rip current. The current is too strong, often.

You might be lucky in that it could be a small current or you might be just to its edge. You might be able to stand on the bottom too. And, rip tides loosen their grip, eventually.

What you do not want to do is swim yourself to exhaustion. Getting into oxygen debt and sprinting might be good for about 20-seconds. Some might go 40-seconds. But then if you are totally spent physically and are no closer to the beach, your chances of survival are greatly diminished.

The other thing that kills is PANIC. Stay calm. Going nuts out in the water is going to tighten your muscles, compromise your breathing, speed your heart rate and present a faster ticket to your death.

With good fortune, you’re at a beach that is guarded with professional lifeguards who are not already occupied with pulling other tourist out of another rip current. If the lifeguards can be notified — GREAT.

I know of two brothers in their 20s who were both sweapt out in a rip current on their last day of vacation in Costa Rica. An hour later, the one guy made it back to shore and the other’s body was found a few days later. This ordeal might take many minutes to unfold. They got separated in the first moments of knowing what was unfolding. That’s so sad.

Can you stay together? Look out for each other. Calm one another. Take turns waving, shouting, resting.

The wise move is to swim out of the current. Are the waves breaking differently to the one side or the other? Swim parallel to the shore, generally, so that you are not going directly against the current, but rather with it slightly and then to the side.

After you get out of the current, swimming back to safety is going to be easy.

FLOAT. Take gentle strokes. To swim, you’ll need to get to the top of the water with your legs and hips, floating more like a boat and not being vertical like a building. Boats float. Buildings sink. Boats and swimmers that look like tall buildings sink. Get flat and horizontal. Let your head stay low. Bring your feet up.

It is okay to swim three, four or five strokes on your front and then roll over to your back and take breaths, keep a gentle kick, watch out for the next waves and rest with the head back, chest, belly and legs up near the surface. Then when ready, flip back to the front and take some additional strokes. 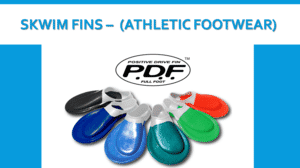 Another great tip that more people need to follow: WEAR FINS in the open water. Surf rescue lifeguards, Coast Guard Swimmers, NAVY Seals and others who work in the water wear FINS. Recreational swimmers, body surfers and even those learning to competitive swim should be with FINS on while in the water. Our feet with fins are far more effective and efficient. Take your fins with you on vacation and wear them when on the beach and in the water. With fins, you’ll be able to kick with some power and speed in a sideways direction and get out of the rip.