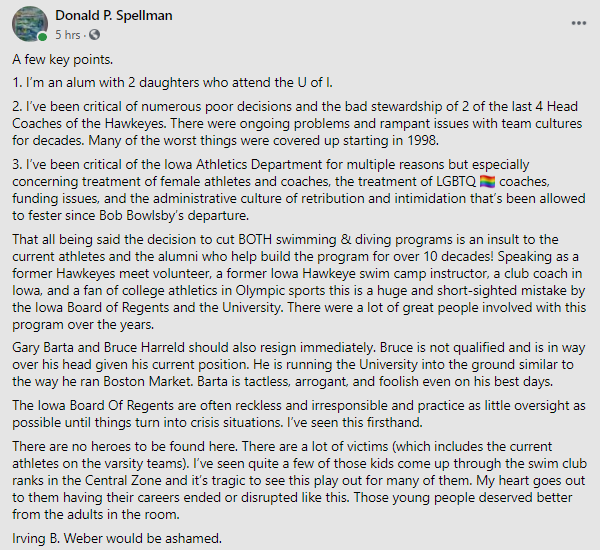 Coach D spells out his views.

2. I’ve been critical of numerous poor decisions and the bad stewardship of 2 of the last 4 Head Coaches of the Hawkeyes. There were ongoing problems and rampant issues with team cultures for decades. Many of the worst things were covered up starting in 1998.

3. I’ve been critical of the Iowa Athletics Department for multiple reasons but especially concerning treatment of female athletes and coaches, the treatment of LGBTQ

coaches, funding issues, and the administrative culture of retribution and intimidation that’s been allowed to fester since Bob Bowlsby’s departure.

That all being said the decision to cut BOTH swimming & diving programs is an insult to the current athletes and the alumni who help build the program for over 10 decades! Speaking as a former Hawkeyes meet volunteer, a former Iowa Hawkeye swim camp instructor, a club coach in Iowa, and a fan of college athletics in Olympic sports this is a huge and short-sighted mistake by the Iowa Board of Regents and the University. There were a lot of great people involved with this program over the years.

Gary Barta and Bruce Harreld should also resign immediately. Bruce is not qualified and is in way over his head given his current position. He is running the University into the ground similar to the way he ran Boston Market. Barta is tactless, arrogant, and foolish even on his best days.

The Iowa Board Of Regents are often reckless and irresponsible and practice as little oversight as possible until things turn into crisis situations. I’ve seen this firsthand.

There are no heroes to be found here. There are a lot of victims (which includes the current athletes on the varsity teams). I’ve seen quite a few of those kids come up through the swim club ranks in the Central Zone and it’s tragic to see this play out for many of them. My heart goes out to them having their careers ended or disrupted like this. Those young people deserved better from the adults in the room.

Irving B. Weber would be ashamed.